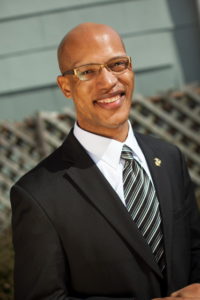 Hope Restored, Inc. is a non-profit organization focused on reducing recidivism and personal hopelessness by providing access to information to individuals and families in need of knowing the options available to them to live a life full of Hope.

We had an amazing time meeting with Jeffrey Thames, Founder and President of Hope Restored. His spirit, energy, and passion for his work are unparalleled and contagious. You can’t help but smile as he talks about the lives he’s been able to impact here in Silver Spring. As a young man on paper, Jeffrey O. Thames, Sr. would not be a person you’d think would able to help black men stuck in the drug game or coming out of jail. Growing up in the privileged town of Merrillville, Indiana – one of eight, son of a pastor and steel mill worker, Thames was not exposed to the criminal justice system and was one of the only black faces in his high school. After emerging from the Marine Corps, Thames quickly got connected with many wealthy black entrepreneurs in Atlanta. He worked with many celebrities and street entrepreneurs in their inner circle. At one of their events, Thames noticed the entourage of these prominent black businessmen. These young men wanted to be noticed, they wanted to earn the respect of a gang leader and someone at the top. Many of these men were caught up in the drug and gang scene and were in and out of jail. Upon finishing up a prison sentence and looking Thames up in the phone book, one young man called him up and asked for his help in getting out of jail. He couldn’t be released without a “home plan”? You stay locked up. He saw a need here. He saw a way his life experiences could help these men. With a unique ability to float between two worlds – Thames wanted to use that ability in the best way.

Ex-cons have records and that prevents them from getting jobs. Lacking in education, some find rejection there. Thames aimed to be an intermediate between the wealthy executives that he knew and worked with and that trusted him and the men on the street in desperate need of help to change their life track. “I wanted to get them a seat at the table, help make the connection between the seller and the buyer,” says Thames when describing the business interaction. He often would speak to low-level drug dealers trying to get noticed that the skills of running drugs, are used by major companies all over the place, but called by a different name like “marketing” or “communications”. Using his connections, Thames connected a street dealer with some cheap merchandise to sell on the street – “defective” shirts and socks that the company couldn’t sell would sell at street markets for a good price. He set up an infrastructure for this young man to sell items without looking over his shoulder all the time with worry and fear. Today, he’s upgraded to electronics, no longer deals drugs and is happy and successful.

In another anecdote, Thames went back to Indiana in nearby Gary and met up with an old friend who was a college athlete at Purdue, played in the NBA and even overseas. He had gotten into drugs and was back in Gary feeling hopeless. Thames spoke with him about his trials and instead said, “No, it’s not hopeless, it’s hope restored.” That was the spark. That was it. He needed these men to have hope restored. He was and always had been an advocate for these low-income men with so much on the line but with so much to give. This young man ended up starting a landscaping company in Gary.

“These young men need a mentor,  Jeffrey. It’s your time. It’s what you’re here to do” – Charles Bobbit (James Brown’s manager) to Jeffrey Thames in 2011. “The first reservation is trust,” describes Thames when asked how the men feel about working with him and others. “They are hesitant to reach out and to open up their vulnerability. It’s a conditioned feeling that becomes warranted through their life experiences. This community – Hope Restored – it gives them the bootstraps.”

In 2013, Hope Restored was officially incorporated. It works to help the homeless, ex-cons and struggling people to 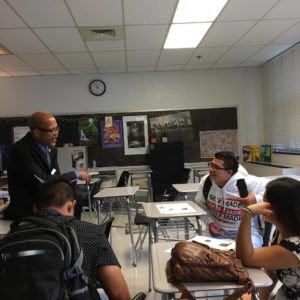 gain a foothold and solid base of support as they try and be successful and live their best life. Thames explains that having access to information was a big hindrance to people being able to receive help and support. Starting with the homeless community, Hope Restored wanted to seek a way to help them navigate the interactions between law enforcement and their daily living conditions. They partnered with some shelters and Progress Place to help ex-cons be released. There are then relationships with lawyers and the state’s attorney’s office that contact Hope Restored with potential clients. Clients can take GED classes or job-training that is then presented to courts to reduce sentences, and assist with probation and parole.

Thames is looking to expand Hope Restored into other urban areas with need. By setting up chapters, including back in his home state of Indiana, the work that Hope Restored is doing here in Montgomery County can help others nationally. Thames even went so far as to describe his organization as a 21 st century Underground Railroad – creating a pathway to escape – escape from a difficult and troubled life to one with hope and prosperity. Hope Restored is really about community – a word that Thames describes has a special meaning. “Community is the combination of ‘common’ and ‘unity’ because everyone is important in a community – it’s how you are connected. We need to identify what we have in common instead of our differences.”

How can you help? Thames encourages those interested to come in and meet some of the clients. Learn about what their individual needs and the challenges they are facing.  Maybe it’s tutoring them through a GED course, or extending them an extra room in your house while they get on their feet. Become a mentor yourself and help expose them to new things – like a DC museum or another cultural experience you might normally take for granted. Building this type of community is what is so critical to the mission of Hope Restored. Maybe you own a company or business that could use a few hard workers that just need the chance? There are lots of ways to engage. Don’t have the time right now? Consider making a financial donation to help support this work.

Still want to learn more? Jeffrey would love to connect. You can reach him at 202-810-HOPE (4673) or by email at Jthames@HopeRestoredInc.org.

Sign up for our newsletter to stay informed and involved in your community.